(December 15) Lunar Roving Adventures – Dust, Dust, Everywhere – What Are We Going To Do? by Mr. Ron Creel

(This posting here is for information and donation only. No ticket sales on Meetup. Please follow RSVP link above (or below) for tickets. Thank you very much ! )

Dust, Dust, Everywhere – What Are We Going To Do?

Please join us and learn more about the exciting Lunar Rovers, and the issues for dust exposure for the Lunar Missions and Human Settlement on the Moon !

Mr. Ron Creel is a space thermal and systems engineer who began his NASA career in 1965 as a co-op student at the Marshall Space Flight Center (MSFC), joining full time in 1969, after graduating from Florida State University with a degree in Engineering Mechanics. Creel has more than 51 years of extensive experience on space engineering projects, both for the Government and industry.

As thermal control engineer on the Lunar Roving Vehicle (LRV) Team, his responsibilities included design, test verification, and mission support engineering for the vehicle’s thermal control system – in his words, “a high-speed and challenging task on America’s spacecraft with wheels.” For his contributions, he was awarded the “Silver Snoopy,” the NASA Astronaut Corps’ own special award for outstanding performance.

During the Apollo Moon missions using the LRV, Creel experienced the frustration of trying to cope with the adverse effects of lunar dust and is an active and enthusiastic resource for technology development efforts to develop Isolation Technologies for mitigation of adverse lunar dust effects for NASA.

He is also interested in contributing to development of nuclear systems for survival and robotic and manned exploration of the Moon. He is a much-sought-after expert and speaker who willingly describes the Apollo LRV thermal design, test verification, and mission support systems and shares experiences gained in coping with the harsh lunar environment.

He supports several educational projects, such as lectures and the NASA Human Exploration Rover Challenge held at the U.S. Space and Rocket Center for High School and College student teams, and enjoys sharing his experience with students and young and old aerospace professionals. He has also formed a team which is developing LUROVA – the LUnar ROVing Adventures 3D “Edutainment” simulation for student involvement and challenge.

Disclaimer: The views of the speakers do not represent the views of AIAA or the AIAA Los Angeles-Las Vegas Section.

Tickets: (No Refund within 7 days before the event. No Refund during or after the event.)

(Those K-12 student registrants will be required to type in a statement during registration to confirm with honesty they are indeed High School or K-12 Students.)

$0 (No Charge): AIAA Member with 20 or more years of membership 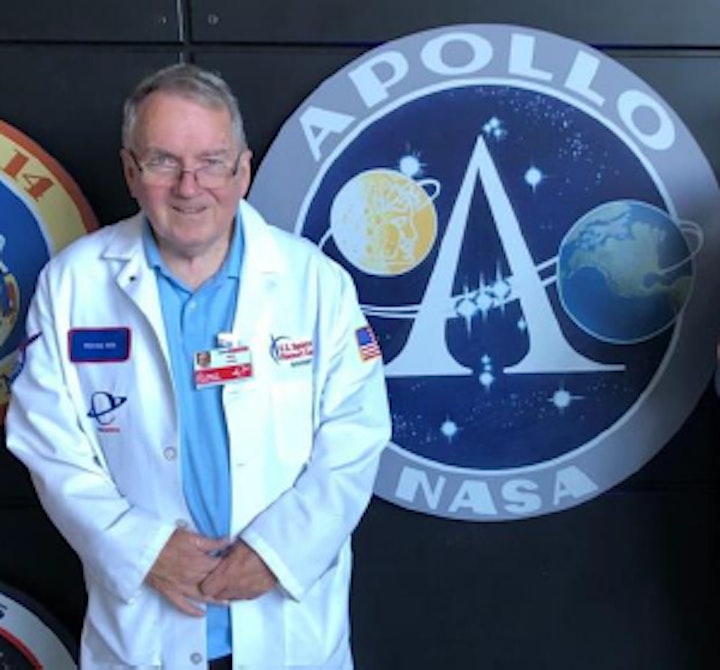 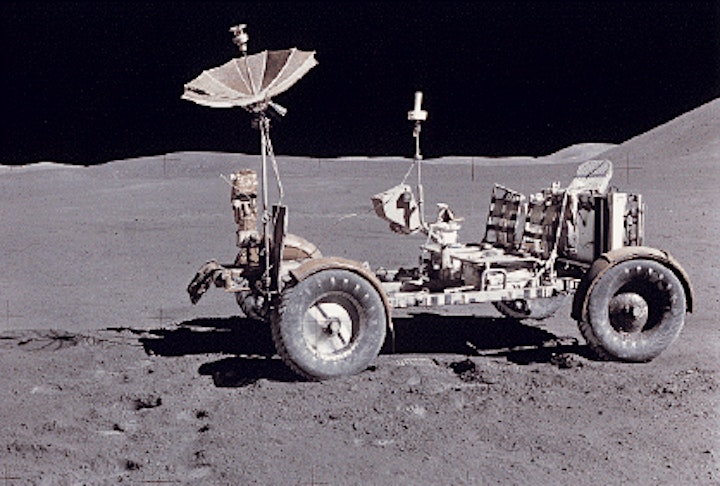 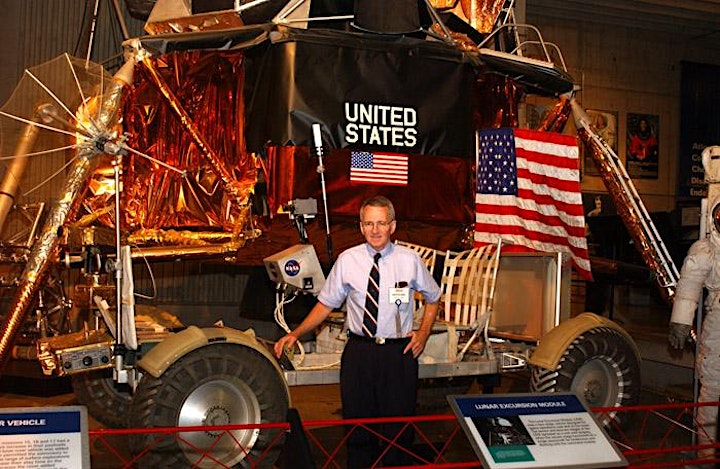 (Also see the upload on this site below):

In the Science Fiction novel “2Reply noReply” of the Belgian author Peter Rakers about the preparation of martionauts, she plays her own character training and teaching the selected crew before their space mission to Mars.

July is the Month for America and Space!

Please Join us in this e-Happy Hour on the historic date of July 20th (Apollo 11 Moon Landing and Vikings Mars Landing) and in the auspicious month of July for American Independence! Share your thoughts about those 2 great events, Mars 2020 Perseverance Rover & Ingenuity Mars Helicopter, where to build the Moon / Mars Bases, Mr. Jeff Bezos’s going into Space on July 20th with Blue Origin’s rocket / vehicle, recent May 22nd flight into Space by Virgin Galactic’s SpaceShipTwo and July 11 flight into Space with Sir Richard Branson, SpaceX’s Starship development and Planetary Defense efforts (launching DART for NASA), NASA SOFIA’s (NASA’s Stratospheric Observatory for Infrared Astronomy) discovery for water on Clavius Crater, the place where the Moon Base in the legendary Sci-Fi movie “2001 Space Odyssey” is designated, the space transporters (like the Eagle in “Space 1999”) with moon bases, and the ongoing NASA Artemis Missions, along with the growing Lunar / Space Economy, Space Tourism, Sci-Fi, and/or life etc. And mostly, relax and enjoy a mid-summer evening with like-minded folks and the AIAA / LA-LV / aerospace communities!

Look forward to your participation and having a fun evening with us!

Please RSVP / register. And join us online on July 20, 2021. The web link, password, and simple instructions will be emailed to the registrants after Saturday, July 17, 2021, a few days before the event. Please check the email Spam or Junk folder at that time if you don’t see it in your email Inbox.

You will be able to meet, chat, networking, and socialize with a computer web browser, camera, microphone / speaker, and a high-speed internet, similar to join a Zoom meeting with a link/URL and password to be provided a few days before the event. A keyboard (a real keyboard of a virtual keyboard) is needed to move around in the virtual meeting facility, to have the mixed-reality simulated in-person presence and experiences. If your computer is ok for a Zoom video / audio meeting (or similar), it will be ok for this as well.

Please join us and give it a try. And help us to try out for a different new way of networking, socializing, and meeting. It will be fun. Thank you very much ! Look forward to meeting you there in this e-Happy Hour! Enjoy!

AIAA LA-LV Celebrates the Anniversaries of

(The list may not represent the actual order of presentations.)

“NASA Astronaut Program – How to Become an Astronaut”

Professor and Chair, Department of Aerospace and Mechanical Engineering,

“Radiation Protection of Astronauts, and Human Space Exploration to the Moon and Mars”

Member, The United Nations Scientific Committee on the Effects of Atomic Radiation (UNSCEAR),

Disclaimer: The views of the speakers do not represent the views of AIAA or the AIAA Los Angeles-Las Vegas Section

Login: Please RSVP/register on https://conta.cc/3gQa6B2 and the Zoom link will be in the Confirmation email that will be sent right away / shortly after the success registration/RSVP. If not in the Inbox, please check the Spam / Junk folder and pull it out. It should not take too long. Contact events.aiaalalv@gmail.com if any question. Thank you very much !

This presentation will address, using figures, photos & videos, the notable 60-year history of the development & use of nuclear systems for power, heating, and propulsion in space — principally by the U.S., but also briefly by the former Soviet Union & Russia. U.S. space nuclear systems, as well as nuclear-powered/heated space missions flown, will be illustrated & described, along with major discoveries gleened; and future nuclear systems, along with their potential space applications, will be briefly depicted and addressed.

Colonel Sholtis is the Owner & Chief Engineer of Sholtis Engineering & Safety Consulting, providing expert nuclear, aerospace & systems engineering consulting services to government, national laboratories, academia, and private industry since 1993, He founded his company immediately upon retiring from the Air Force after a distinguished 23-year military career. Colonel Sholtis has broad technical & programmatic experience in all life-cycle aspects of advanced nuclear energy technologies & systems for space, missile & unique terrestrial applications. Forty years of his 50-year career to date have involved space nuclear power & propulsion technologies, systems, programs & missions. He is internationally recognized as an expert in space nuclear systems, their safety & reliability, and assessment of the risks associated with their validation testing, launch & in-space use. He also has extensive experience in program & technical project management, to include serving as Program Manager of the $700M joint DoD/DOE/NASA SP-100 space reactor power system development effort at DOE HQ for the Strategic Defense Initiative, as well as leading, conducting & assessing numerous studies, analyses, evaluations & reports, and presenting the results to middle & top management within DoD, NASA, DOE, NRC, EPA, the National Academies, the Administration (White House), Congress & the United Nations. He has been Involved in every U.S. space nuclear system development since 1974, and every U.S. nuclear-powered or heated space mission launched since 1975 — a total of 15 missions: Viking I & II, Lincoln Experimental Satellites 8 & 9, Voyager I & II, Galileo, Ulysses, Mars Pathfinder “Sojourner” rover, Cassini, Mars Exploration Rovers A & B “Spirit” & “Opportunity” rovers, New Horizons-Pluto, Mars Science Laboratory “Curiosity” rover & the Mars 2020 “Perseverance” rover. Currently, he is supporting the advancement of radioisotope and fission power systems for future space use; including conceptual design options for a new radioisotope heat source using Pu-238 oxide microsphere particle fuel, for a Jet Propulsion Laboratory cryobot concept (to penetrate the ice sheets of Europa or Enceladus, and explore their liquid oceans beneath in the future). He recently completed participation in a 1-year National Academies’ Committee study of ‘Space Nuclear Propulsion Technologies’ for NASA cargo missions and a first crewed mission to Mars in the 2030s. He is a former NRC-licensed Senior Reactor Operator; Reactor Facility Director; Director of the USAF Nuclear Regulatory Authority; and an inventor, who conceived of and advanced Pu-238 oxide coated particle fuel & fuel forms, to improve the design, integration, performance & safety of future radioisotope heat sources & power systems for space and remote terrestrial applications. He received a BS in Nuclear Engineering from Penn State in 1970, an MS in Nuclear Engineering from the University of New Mexico (UNM) in 1977, and completed PhD coursework in Nuclear Engineering, also from UNM, in 1980. He also holds Graduate Certificates in Systems Safety, System Safety Management, Systems Engineering, and Program Management from various institutions. He has received numerous awards from the White House, USAF, DOE, NASA, Sandia National Laboratories, the Jet Propulsion Laboratory, is a biographee in several Who’s Who publications, including Who’s Who in America. He is an Associate Fellow of AIAA, a member of the AIAA Aerospace Power Systems Technical Committee & the Albuquerque Section of AIAA. For more info, including his Resumé & List of 120+ Publications, go to: https://www.sites.google.com/site/SholtisEngineering

Disclaimer: The views of the speakers do not represent the views of AIAA or the AIAA Los Angeles-Las Vegas Section.